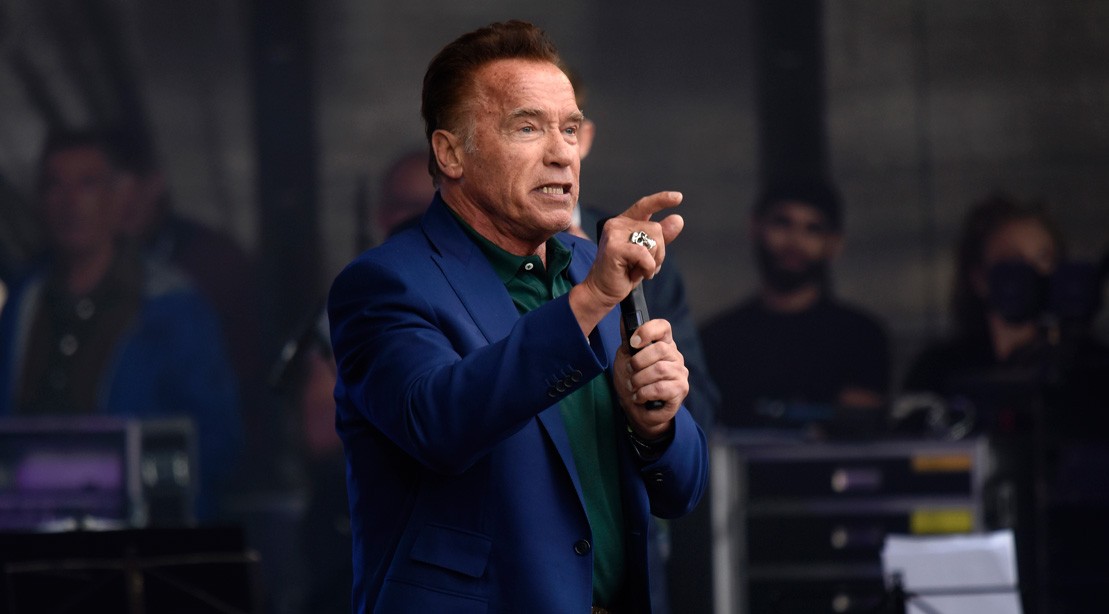 Arnold Schwarzenegger is one of the most idolized bodybuilders of all time. His physique during his Mr. Olympia reign and the movies that followed was, and still is, a look that countless men around the world strive to achieve.

That said, the Austrian Oak has stirred up controversy in the bodybuilding community as of late. First, it was his stance on steroid use that got people talking. Now, it’s his stance on plant-based eating.

Schwarzenegger, a vocal environmental advocate, is an executive producer for the newly released documentary, Game Changers, which chronicles the rise in plant-based diets in the athletic world. In the past, Schwarzenegger has stressed the importance of cutting down on meat to reduce greenhouse gas emissions. Game Changers will “terminate outdated myths about protein, strength, and performance,” Schwarzenegger wrote in an prior Instagram post featuring a trailer for the film. In the video, he revealed that though he ate a lot of meat in his bodybuilding days, the idea that “real men eat meat” is just marketing.

James Cameron and I have teamed up again. This time to terminate outdated myths about protein, strength, and performance. Get your tickets to @gamechangersmovie before they sell out. Do it. Do it now! #thegamechangers #changeyourgame

The documentary features athletes like Olympic weightlifter Kendrick Farris, bodybuilder and former M&F cover star Nimai Delgado, and strongman Patrik Baboumian, all vegans. Schwarzenegger said in a recent Instagram post, “I promise you that these elite athletes will blow your mind.” He encouraged his fans to see the movie.

When the movie was first announced, the vegan fitness community showed some serious support but, because this is the Internet, there was some backlash.

Some of the strongest opposition came from bodybuilder and strongman Stan Efferding. He took to Instagram to repost a reaction from Shawn Baker, MD,  a carnivore diet advocate.

I’ve received 100 DM’s already today on this post by @schwarzenegger. . I just copy and paste Dr. Shawn Bakers response below or link his post. . I have Vegan clients. I eat vegetables. I recommend vegetables in the Vertical Diet. . Having said that, performing optimally for competitive athletics as a Vegan is the exception not the rule. I’ve seen way more failures than successes. It almost always catches up with them. . With lots of supplements and PED’s it can be made to work for some but that’s hardly an ideal scenario. . . #Repost @shawnbaker1967 with @get_repost ・・・ They’ve replaced @schwarzenegger with a brain dead robot to hype their vegan bullshit propaganda- @schwarzenegger would have never been Mr Olympia as a vegan- One of the Athletes who was originally in the film, Tim Schieff, had to quit Veganism because it ruined his health, the Olympic lifter Kendrick Farris, built all of his strength on a meat eating diet and then after going vegan he bombed in the Olympics turning in the worst performance of his career, the Strongman Patrick Baboumian, bullt his muscle as a meat eater, took a bunch of steroids as a vegan and was no where eveen close to being the world’s strongest man as the vegans claim, the body builder Nimai Delgado, built his muscle as a vegetarian eating milk, eggs and whey protein and is a best only a mid level physique competitor that would not even get on the stage with with actual pro level meat eating bodybuilders! This highlights that with good genetics, +/- drugs, hard work you can be an athlete but in no way allows you to reach your true potential as a vegan! @schwarzenegger , we are NEVER giving up meat- the bullshit about saving the planet is complete garbage! A soy filled mono crop landscape is a fucking disaster and will only lead to a sick population and a destroyed soil and ecosystem- if you want to not be a hypocrite get behind regenerative agriculture and stop misleading young people about the bullshit vegan agenda- Cameron and his wife are turning into skeletal wraiths and giving his message your voice out of friendship or money is a huge mistake! #goveganandshortchangeyourself #yes2meat #no2fakefoo

Both Baker and Efferding assert that veganism and optimal athletic performance don’t go hand-in-hand. For Efferding’s part, he says that achieving success as elite athletes is the exception, not the rule. Baker offered his opinion in some pretty raw terms, saying that “they’ve replaced @schwarzenegger with a brain dead robot to hype their vegan bullshit propaganda,” and that the Oak never would have become Mr. Olympia on a vegan diet.

Similarly, there’s been some debate in Arnold’s most recent Instagram post on the movie. White House chef and pushup freak Chef Rush commented, Being a chef, I’ve seen a HUGE shift in the industry, and my principles are reaping the benefits. I’m still at 50/50 % but learning from you. Can’t wait to watch!!!” He also added, “Ohh by the way! If you think vegan food isn’t tasty! Talk to the chef!!” Others, though, pointed out that no elite bodybuilder has ever been plant-based.

It’s undeniable that Schwarzenegger built his physique while on a more traditional bodybuilding diet, but you have to give him credit for starting a discussion on a topic that was bound to be controversial. In a community where diet strategies are a constant point of discussion, there’s always going to be disagreement.

If you want to find out more, Game Changers—which boasts executive producers Jackie Chan, James Cameron, Formula One driver Lewis Hamilton, tennis player Novak Djokovic, and NBA player Chris Paul in addition to Schwarzenegger—can now be seen in a theater near you. Click here for more information and movie times.