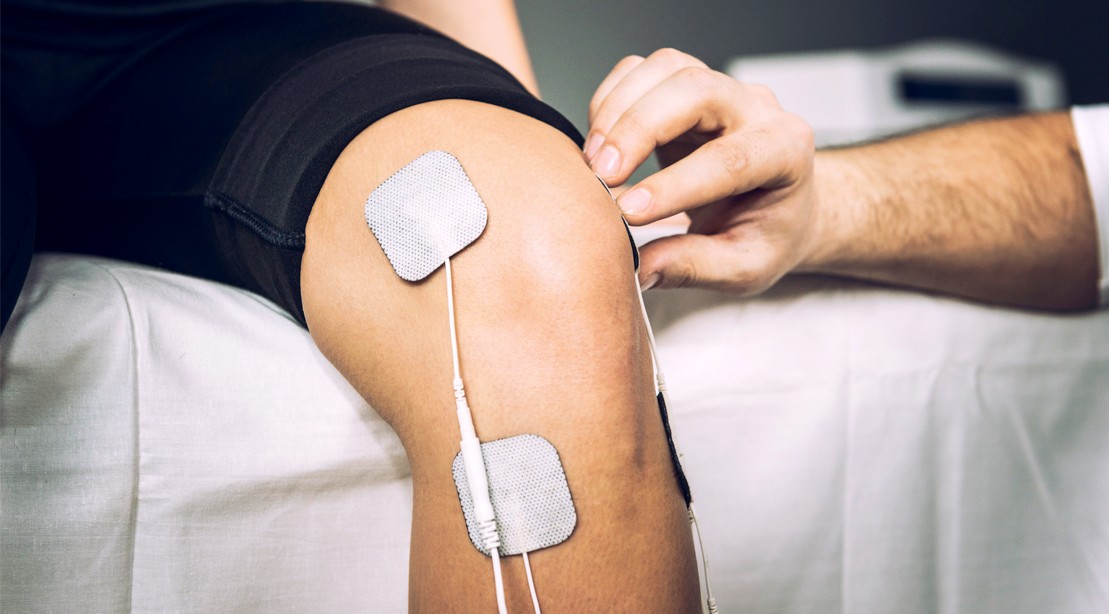 Using electrical muscle stimulation, also known as EMS or e-stim, for rehabilitation, pain management, or performance isn’t a new concept—Bruce Lee was an early adapter. But its use has picked up in the last few years as high-tech methodologies have found their way into homes, gyms, rehab centers, and sports performance labs.

During EMS, a trainer (or more likely for most people, a physical therapist) sticks small pads called electrodes onto an athlete’s skin. The electrodes, which are wired to an e-stim machine, stimulate muscles with low-level electrical currents and force them to contract. The sensation depends on how high the machine is set, but it can range from a light tingling and hardly any muscle movement to some pretty significant discomfort and full-on twitching. If you’ve never had the pleasure of trying it during a workout, let us set the scene.

Your trainer tapes some electrodes to your back. With scant warning, he or she twiddles a dial and sends 100 milliamps of electricity into your lats. Wincing visibly, you stagger to the pulldown station, grab the bar, and pull with everything you’ve got. After 30 seconds, you can practically smell your back muscles cooking.

But the burning question for bodybuilding enthusiasts is will EMS put you on the fast track toward a bigger, stronger, leaner physique?

The answer: possibly. One point is clear, however: EMS can’t replace iron. According to Garrett Salpeter, CEO of leading EMS manufacturer Neufit, if you’re using EMS for hypertrophy, you need to lift while you zap. So you still can’t skip leg day—sorry

That said, devotees of the technology—a cohort that includes beasts like 212 bodybuilding star Derek Lunsford and 2008 Mr. Olympia Dexter Jackson—believe that the device has two advantages over just lifting weights: reduced injury risk and more complete activation of working muscles. Early signs point to EMS as a potentially promising—though not fail-safe—enhancer of traditional strength training.

“You’re getting a similar recruitment effect to what you’d see with heavier weights,” says Salpeter, “but with less chance of injury, and less wear and tear on the ligaments and tendons.”

That’s potentially big news. The bigger and stronger you get, the heavier the weights you need to keep growing. But as your training poundages increase, so does your risk of tendinitis, muscle tears, and other injuries. So for experienced lifters seeking ways to stimulate growth without the need for Ronnie-Coleman-esque weights every workout, EMS could be a huge boon.

Faster fiber recruitment could also reduce workout time—another benefit for the time-crunched lifter. According to a 2005 study published in the journal Sports Medicine, EMS “reverses the order of recruitment of motor units.” Theoretically, that means that your largest, strongest muscle fibers, which have the most potential for growth, kick in earlier than usual, leading to more growth-inducing reps in each set ;and less time in the gym.

The jury is still out on whether EMS can build muscle better than a traditional approach. Some studies show little advantage over traditional strength training, but others point to significant changes—including one 2012 review study in which trained and elite athletes saw measurable improvements in sprint speed and vertical jump height in just six weeks. Not bad for non-newbies.

For now, the primary stumbling blocks are practical. At some facilities, trainers trail their clients with a wheeled cart, re-moistening and re-taping electrodes whenever they switch to a new muscle group. At others, users wear a cumbersome full-body suit. Both methods make training solo a challenge, so for now, any EMS workout you do has to be facilitated by a trainer in a boutique-style facility—a service that runs $100-$125 an hour.

Whether or not all that is worth it to you is a choice only you can make. Because of the expense and inconvenience, EMS is probably better suited to the advanced trainee looking for an edge rather than the average dude trying to look a little better by summer. But hey—if you can handle the inconvenience and you’re advanced enough that you think your workouts could use a little extra shock to the system—go for it.