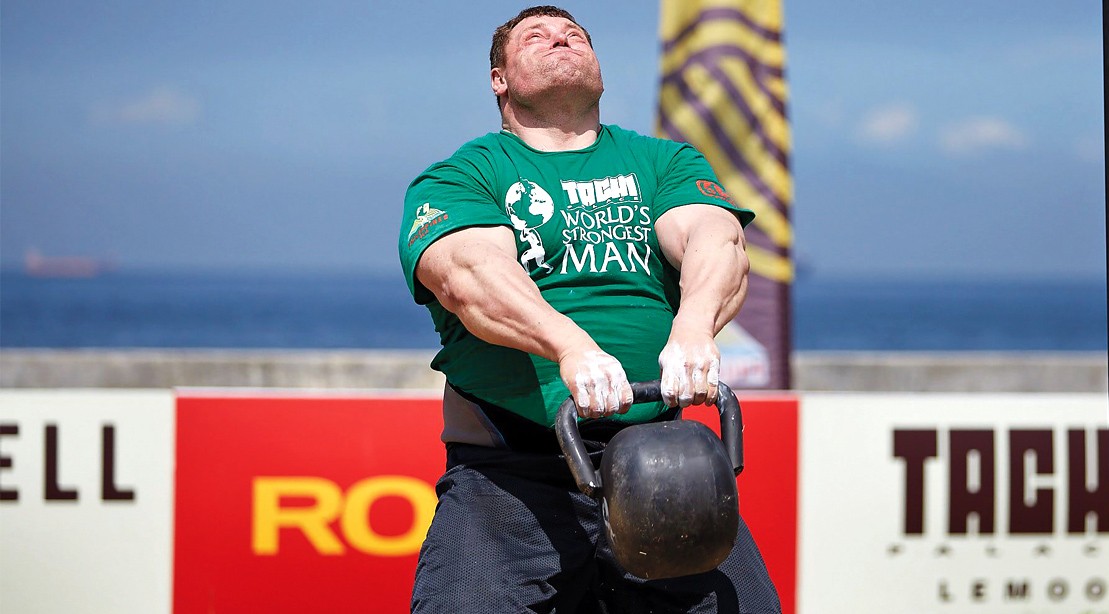 With a few words of encouragement from his uncle, a 13-year-old Žydrūnas Savickas started hoisting weight in the dingy and sparse gyms scattered throughout his native Lithuania. Just nine years later, in 1998, “Big Z” won Lithuania’s Strongest Man competition—a show he would conquer 11 more times.

Eventually he graduated to a grander stage, capturing eight Arnold Strongman Classic titles before peaking in 2009 when he won his first World’s Strongest Man contest. He’d go on to win three more (2010, 2012, 2014), becoming known as the best presser ever in the process, with a world log press record of 502 pounds.

Now, at 43 years old, Savickas has slowed down, passing the torch to younger com­petitors, such as the 30-year-old 2019 Arnold Strongman Classic winner, Hafthór Björnsson, and the 2019 World’s Strongest Man winner, Martins Licis, 28.

The thing is, “slowing down,” is a relative term for Savickas. “I want to continue to compete, and I’m looking to break my all-time log press record,” he says. Savickas explains how he has shifted his training as the birthdays continue to add up.

Winning the World’s Strongest Man for the first time in 2009 was a dream, just based on the great history of the contest. At that point, I had already achieved a lot in the sport of strongman, but many people said my career was incomplete without a WSM title—so I went on to win it four times.

I have been called the best overhead presser in Strongman history. My routine was mostly like a powerlifter’s—bench presses, squats, and deadlifts. For shoulders, I always did behind-the-neck presses. People say they’re bad for your shoulders. I did them seated and found that this exercise is great for building not only strength in the shoulders but also flexibility.

IF IT AIN’T BROKE…

People assume that I completely changed how I do things now that I’m in my 40s. But actually my training routine is very similar. I find that I may need a little more rest and recovery, and I am in tune enough with my body to determine how much work I need for each training session.

When I’m training for a competition, I do legs on Monday; log press, shoulders, and triceps on Tuesday; Wednesday is for cardio, massage, and rehabilitation; Thursday is deadlift day; and Friday is a lighter log pressing and shoulder day. Then Saturday is for Strongman events, and I rest on Sunday.

LOOKING INTO THE FUTURE

There have been a lot of big changes in the sport. Many more countries do Strongman now. At first it was mainly Scandinavia and North America. Now we have countries all throughout Europe, Asia, and Africa that are hosting competitions. It used to be only men with one weight class. Now we have women involved, different weight classes, and even juniors and masters competitions.

The athletes are getting more professional, the competition more fierce, and the popularity is increasing globally. Social media has been huge in getting the word out to young kids. I really like the direction strongman is taking.