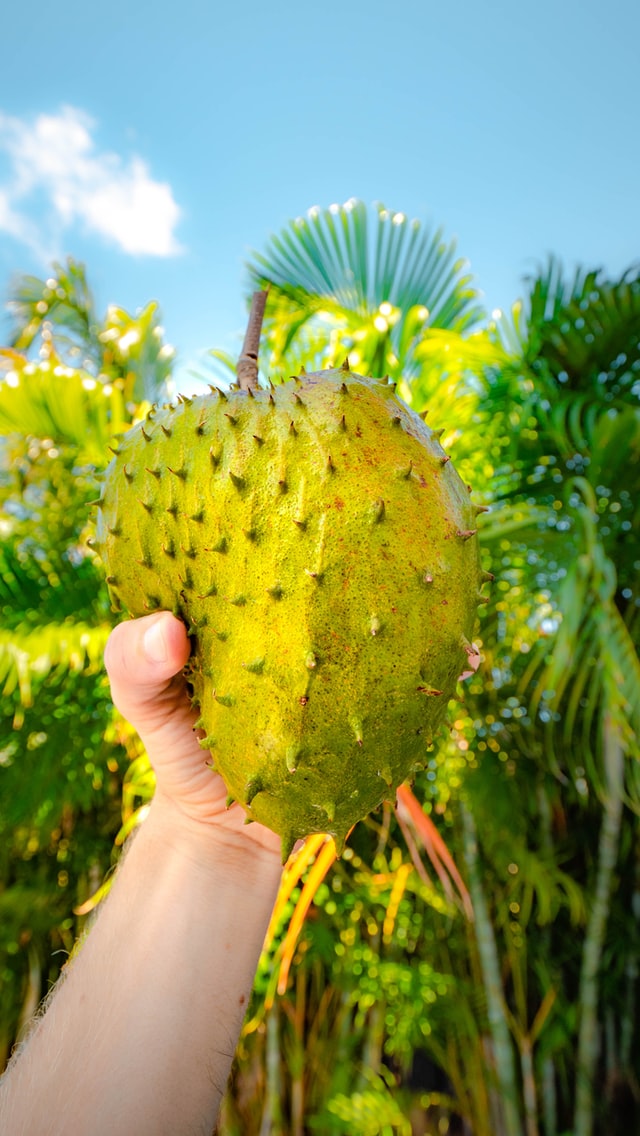 The internet loves superfoods and health trends, especially if they are unusual (has anyone heard of acai?). Soursop is the newest fruit that is getting a lot of attention.

Soursop, which has the scientific name Annona muricata, is a fruit that comes from South America and is known by many names. It might also be called guanabana, Graviola, or custard apple. The outside of the fruit looks like a big avocado if the avocado had sharp spikes all over it.

Even though it looks tough, soursop has a sweet centre. It has large black seeds in its smooth, creamy white pulp. Some people say that its sweet and sour taste is like a mix of strawberries and apples.

Alexis Supan, RD, a registered dietitian, tells you what you need to know about this trendy tropical treat.

Soursop is a healthy source of fibre, vitamins, and minerals, just like a lot of other fruits. One cup of raw soursop, or about 225 grammes, has the following:

The fruit is a good source of nutrients, including fibre:

Soursop is also full of antioxidants, which keep cells from getting hurt. Cancer and heart disease may be less likely to happen if you eat foods that are high in antioxidants.

Soursop has been used as a medicine for a long time by traditional healers. They use the fruit, leaves, and stems, among other parts of the plant, to treat a wide range of illnesses. Soursop could:

Supan says that there is a big problem with these claims. The health benefits of soursop are just now being studied by doctors, so we don’t yet have scientific proof that the plant is good for your health.

Is it true that soursop can help fight cancer?

There is some evidence that extracts from the plant’s leaves could kill cancer cells or fight inflammation. But take it easy: These results came from studies done in test tubes and on animals, where soursop leaf extracts were often given in very large amounts.

“Remember that there have been no studies on humans, so it’s too early to say if there are any benefits,” says Supan.

You can buy soursop extracts and teas, but the U.S. Food and Drug Administration doesn’t keep an eye on them (FDA). Supan warns that there are reasons to be careful. In large amounts, soursop can be poisonous and cause symptoms like those of Parkinson’s disease, such as:

The chemicals in extracts and teas can also cause problems with medications like those used to treat high blood pressure and diabetes. “I don’t think you should use soursop extracts or teas,” she says. “You don’t want to experiment with your health like a scientist.”

Soursop: How to Eat It

Even though you shouldn’t drink soursop extract or tea, there’s no reason why you shouldn’t eat it. “If it comes to fruit, go to town!” Supan says.

Soursop is hard to find in the U.S., but you might be able to find it in specialty grocery stores (like Latin American and Caribbean markets). Supan says that if you can find fresh soursop, you should eat it as it is.

She says, “Soursop has a great creamy texture and a tropical flavour that tastes great when eaten raw.” “But don’t eat the seeds because they are poisonous.”

And don’t forget that it’s a big fruit with a lot of sugars that come from nature. Supan says, “One fruit can have 70 or 80 grammes of sugar, so you might not want to eat the whole thing at once, especially if you’re watching how much sugar you eat.”

Tip: Eat half of them now and freeze the rest so you can use them in smoothies later. It goes well with tropical fruits like mangoes, papayas, and pineapples because of its flavour.

Soursop is a trendy superfood, but it isn’t a cure-all like most of them. But it’s a good source of nutrients and a tasty tropical treat. If you can find a store that sells soursop, you should try the sweet, creamy fruit. Tell them you got there from the Internet.